Hello Kitty and other characters were featured at McDonald's restaurants in some Asian countries, in a celebration of Sanrio's 50th Anniversary.

The same combination ran in Thailand in January 2011. 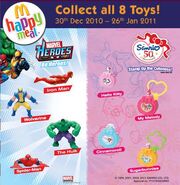 Thai publicity.
Add a photo to this gallery
Retrieved from "https://kidsmeal.fandom.com/wiki/Sanrio_50th_Anniversary_(McDonald%27s,_2010)?oldid=6740"
Community content is available under CC-BY-SA unless otherwise noted.