This was the first Happy Meal series in the world based on the toys. One of the nine toys was only available at Walmart locations of McDonalds. This was the second Happy Meal set to include a Wal-Mart exclusive toy. 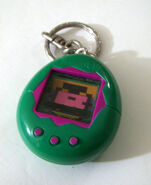 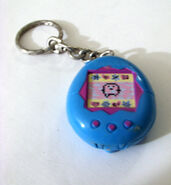 7 - Clearagotchi [Tamatchi version]
Add a photo to this gallery
Retrieved from "https://kidsmeal.fandom.com/wiki/Tamagotchi_Toyz_(McDonald%27s,_1998)?oldid=7514"
Community content is available under CC-BY-SA unless otherwise noted.