The live-action/CG-animated Smurfs movie was featured at McDonald's in July 29, 2011. This is the second time McDonald's has taken on a license from Sony Pictures Animation, the first was Surf's Up. 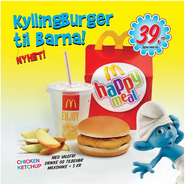 Add a photo to this gallery
Retrieved from "https://kidsmeal.fandom.com/wiki/The_Smurfs_alternate_(McDonald%27s,_2011)?oldid=7164"
Community content is available under CC-BY-SA unless otherwise noted.